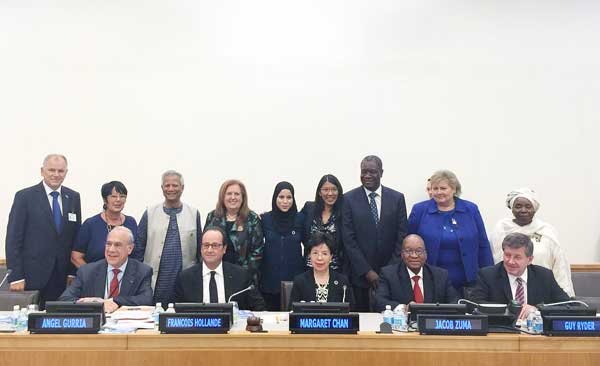 President Hollande of France and President Zuma of South Africa, Co-Chairs of High Level WHO Commission on Health Employment and Economic Growth presented its final report to the UN Secretary General Ban Ki Moon at the UN Head Quarters on September 20. Nobel Laureate Professor Muhammad Yunus is a member of this High Level WHO Commission appointed by the UN Secretary General.

On March 2 of this year, United Nations Secretary-General Ban Ki-moon announced the appointment of a Commission on Health Employment and Economic Growth tasked with proposing actions to redress inequities, and stimulate and guide the creation of health and social sector jobs for inclusive economic growth.

The report was formally handed over to the Secretary General in a formal ceremony in the presence of all members of the Commission at a special meeting  convened at UN Headquarters on September 20 on the sidelines of the UN General Assembly.

On the previous day, the Commissioners met at a special meeting at UN Headquarters to endorse the report in a session moderated by Dr Richard Horton, Editor of Lancet.

The report, which aims to convince Heads of State of the pressing need for strong mobilization in favor of enhancing the health workforce as well as health employment in order to contribute to the 2030 SDG Agenda, made ten recommendations made in the report relate to job creation, gender and women's rights, education training and skills, health service delivery and organization, harnessing of cost effective ICT, crises and humanitarian settings, financing and fiscal space, partnership and cooperation,  international migration, data, information and accountability.

Nobel Laureate Professor Yunus was invited by the Director General of WHO to contribute a special box in the report on the role that social business can play in reaching healthcare to the poorest around the world who are not reached by conventional health care programs. This is now presented in final report as a box. Professor Yunus argued that the solution to healthcare is in making it sustainable, and affordable, to the extent of making it almost costless by introducing power of technology to enable it to reach every single person on the planet, focusing on prevention, promotion of social business entrepreneurship  and  elimination of all unhealthy foods and drinks.

The report recommends the UN Secretary General to help establishing appropriate global framework and makes sure recommendations in the report are included in action plans by national governments and to develop a five-year implementation plans for the recommendations.

For the most part, health  service delivery in any country  has been the work of three players  with varying degrees of participation: government, profit-seeking private  sector and charities. Despite the efforts of these three, billions of people remain  unreached. Thus, I have been promoting a fourth approach – social business – because I believe  that  the application  of the concept of social business can lead to the redesigning of the entire  health-care sector.

Existing limitations
Few  would argue  against the position  that  the current way of doing the business of delivering health  care has serious limitations.  In many  countries, government health-care programmes run into bureaucracies rife with inefficiency, lack of innovation  and initiative, corruption and wastage. Because of these problems, the people at the bottom of society suffer  the most. The profit-seeking private sector is concerned with the upper  segment of the market where they  make  their profit; they  do not focus  on the bottom half of the population, on those who are in greatest need of their services. And although charity programmes do reach  the poor and the poorest, they  are unsustainable. As a result, they  can provide service only to a limited number of people and only for a limited time.

What is social business?
The concept of social business stands between the profit-seeking private sector and charity. It has the same goal as charity but is powered by the engine of business. It is sustainable while at the same time it reaches out to the poorest. It is driven by technology to make  health  service universal,  cheaper and affordable. It can be run by anyone – industry,  business, government, individuals, foundations, nongovernmental organizations.

We have created many  practical examples of social business by applying this concept in Bangladesh and other  countries. Believing that  health  care should  be technology based and oriented primarily towards prevention, we  have set  up a chain of eye-care hospitals, clinics, nursing  colleges and joint ventures with multinational companies who deliver the basic  essentials for health  such  as nutrition, water, mosquito-nets and food.

The Grameen clinics’ experience proves that  a medical  system “for the poor”  can be almost entirely self-supporting, and can reach  self-sufficiency. For example, the Grameen GC Eye Care Hospital in Bangladesh, and the Aravind hospital  in India can do cataract surgery for US$ 25. We are in the process of setting up hospitals and medical  colleges. We are encouraging technology companies to provide all diagnostic services through smart phones to make  them almost costless. We emphasize prevention, to keep  people healthy  and avoid costly cure  procedures. We insist that  the goal of health care should  be to keep  people away from diseases, rather  than  wait for the point when they  have to show up at doctor  chambers or hospitals for treatment.

We see health  care as an excellent area for entrepreneurship, bringing out the creative power of citizens  expressing themselves to solve health  problems through social business. We encourage young people to become entrepreneurs, job-creators rather  than  job-seekers, tackling the health concerns of those who are left out.

REPORT OF THE COMMISSION